Where it all began

This page relates to the work of the late Mr ‘Surveyor’ Keith Budnick (as was his formal title).

Keith was the mentor to many of us here at Le Mottee Group. Sadly, Keith passed away on January 3rd 2005 as a result of Skin Cancer. 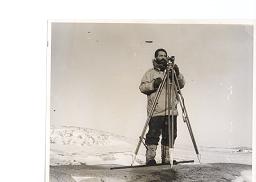 This photograph shows Keith working in Antarctica. He travelled there twice. Firstly between December 1962 and March 1963 and then again from December 1963 to March 1965 – a duration of 14 months without so many of the creature comforts that people take for granted.

The purpose of the survey undertaken during the first expedition was to map the accumulation / ablation zone. That is, all the snow and ice in Antarctica is thought to constantly move towards the coast similar to glacier movement. As the ice pushes towards the coast it tends to thicken (accumulate) until it reaches the point where warmer temperatures start to melt the ice and it thins (ablation). The line where this happens is known as the accumulation /ablation zone and monitoring this line helps scientists to predict things like the next ice age or higher ocean levels causing salinity problems. Keith was the first surveyor to map the position of the accumulation /ablation zone.

In addition to this work, Keith placed ground control marks for photogram metrical mapping of the area. That is, marks that can be seen from the air or more specifically, can be seen on aerial photographs. The Latitude, Longitude and Height above Sea Level of these marks were determined by Keith. The aerial photographs showing the known marks were then used to accurately plot the landscape, generate contours, and establish the heights of hills and structures.

The second expedition was originally intended to involve the re-surveying of several existing trig stations to determine if there was any movement of the land mass under the ice and to place several new trig stations to help in future monitoring of this type. However, the Australian expeditions had until this point been using the Wilks Base as their centre of operations. Wilks Base was owned by the Americans and was only “on loan” to Australia. Just as Keith’s ship left Melbourne, funding was approved for Australia to build its own base, now known as Casey, on the Southern side of the bay opposite Wilks. Keith’s mission was then revised to one of undertaking contour and detail surveys over the site and adjacent coastline and identifying suitable building sites, mooring for supply ships, landing sites for aircraft and generally determining the suitability of the area for a base. Keith determined that the site was suitable and it is to this day the main base used by Australians undertaking Antarctic research.

On both expeditions Keith was responsible for navigating the supply ship along the treacherous coast of Antarctica as it resupplied not only the Australian Expeditions at Wilks and Macquarie Island but the bases of many other nations as well.

Would you like to know how much money is hidden in your back yard? Contact our office today to find out.

Let us control your project for you. Make an appointment to discuss our flexible project management solutions today.

You can get a return on your investment much quicker than going through council. Let us show you how.

Le Mottee Group are experts on Rural, residential, commercial and industrial subdivisions. Let us take away the confusion.

Le Mottee Group can assess the type and amount of engineering for your project. Allow our experienced staff to coordinate this for you.